App: Dropbox, by Dropbox Co.
For: All smartphones
Price: Free
Whether it’s a laptop or a notebook, anything bigger than a smartphone is cumbersome for most people to carry or transport. But what if you need your laptop or notebook regularly because you have files on your computer that you must access? A really clever app that is simple to use is called Dropbox. Download Dropbox on any personal device, including smartphones, computers, or notepads and you have full control over your uploaded files anywhere, anytime. Save anything you may want to access at a later time to the Dropbox folder. For example, on your personal computer you can save documents, pictures, videos, and text files into the Dropbox folder. This “cloud” storage by the Dropbox Company saves your data safely and quickly. You can use your smartphone to access anything that you have saved in that folder. You can also save things from your smartphone to later access on your personal computer from the Dropbox folder. If you are working on a project with others, it’s helpful to create a password protected Dropbox folder that you all can share and access. It’s especially handy with large files that cannot be sent via email. Dropbox has become a “must have” download for thousands of happy clients, and it’s absolutely free!
Alex Pawlakos enjoys biking, weightlifting, and tutoring in his spare time. He is a reporter on Express Yourself™ Teen Radio.


In the News: Published Version​​ 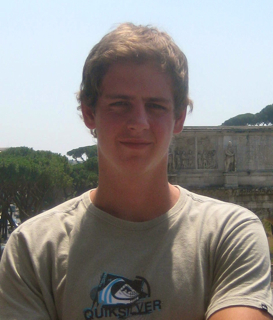