High school is hard enough without moving the summer before freshman year.
Getting used to the rushed pace of passing periods, lugging back-breaking textbooks, and rigorous life-or death tests, like the AP and the cursed SAT, is difficult any time, even when surrounded by people you’ve known since elementary school. Being plunged into a new community right before high school makes this transition even more challenging.
High school is notorious for cliques, bullying upperclassmen, and judgmental teens. To survive and thrive the four years of study requires the solace of true friends. But how do you make friends in a new location when people don’t even know your name, and really don’t care to?
“Moving in general sucks, but leaving friends is the worst part,” said Miramonte sophomore Hanna Abruzzo. “Outgoing people definitely have an advantage when it comes to adjusting to new surroundings.”
Some teenagers deal with the upheaval with a positive outlook. Sophomore Yurika Kazama has moved to three different countries because of her father’s job. Despite the difficulties of moving frequently, often without warning, Kazama tries to make the best out of her situation. “Once you move you realize what you truly miss and love about a place. You learn a lot of things about yourself when you adapt to a new place. Moving to Lamorinda as a sophomore was incredibly demanding but the community has been really welcoming,” said Kazama.
After attending private school for eight years, Izzy Fasheh transitioned to Miramonte High School. “I felt nervous, and a little worried about coming to a new school," said Fasheh, currently a sophomore. "I’m finding that public school is more diverse and less strict. There are fewer rules and you can wear what you want. I didn’t know what the people were like or how they’d react to me. The good thing about moving schools was meeting new people and learning about the Lamorinda community."
Adjusting to a foreign neighborhood with radically different people is usually overwhelming, especially combined with the additional burdens of freshman year. Adopting a positive, outgoing attitude to change seems to be the cure for the bittersweet memories left behind. By reaching out, getting involved, and nurturing friendships, social skills are developed and broadened. Plus, adapting to a new environment at an early age is good practice for that giant leap after senior year called “college.”

Youngjoo Ahn is a sophomore at Miramonte High School. In her spare time, she enjoys experimenting in the kitchen, skiing, and taking pictures with her Polaroid camera.

IN THE NEWS: : Published Version

Cynthia Brian is the teen coach and editor of Teen Scene 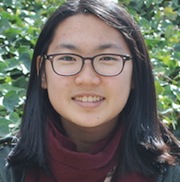